An Australian cold-case from yesteryear, Bodies tells the tale of tightly-bonded identical twin brothers Paul and Chris Dawson, both already married with families, locally-famous footballers, and high school teachers that presumably teamed up to sexually engage the more-attractive female age-of-consent 16-year-old students in their classrooms, eventually hiring the prettiest as babysitters in their own homes. [Podcastreview]

“We shared the looks,
and the womb,
you came before me,
our love was new“

This culminated in Chris having an affair with student Joanne Curtis and inviting her to move into his home with wife Lynette Joy (Lyn) and their two children. A year later Lyn’s mother would recount a phone conversation with her daughter on the same ill-fated day as the couple had returned happy from a marriage counseling session, and that Lyn herself would end up missing. In uncharacteristically slurred speech, Lyn had shared that husband Chris had just made her “a lovely drink“, perhaps oddly as Lyn was a known teetotaller. [Wikipedia]

“I was stuck,
in a rhythm of hate,
speaking in tongues,
the devil can wait”

It would be the last anyone heard from Lyn, though Chris explained to police this was because she had left him and their daughters to join a religious cult, after which Joanne immediately began sharing his bed. He would spend weeks asking her to marry him with her finally relenting and tying-the-knot only scant months after Lyn’s disappearance. [Grunge]

[The trial is now set for May 2022 due in no small part to the now-famous 12-hour podcast Teacher’s Pet published by The Australian newspaper that reignited this cold case from its 80s slumber, and served as inspirational in cutting this track.]

“We masked ourselves and our bodies,
you never knew any better,
we couldn’t tell anybody,
our love was lost and forever“

Edinburgh-based, multi-instrumentalist, producer, and remixer Pete Burns (aka Kill Shelter) together with Sydney-musician and lyricist Marc Dwyer (aka Buzz Kull) remotely-colluded to create this instrument-of-inkiness. “The original demo track carried the main flattened fifth guitar line (also known as the Devil’s Interval) so it always had an unnerving and unsettling quality to it from the start, but it was where Marc took it vocally and lyrically that really set fire to the track…“, said Pete. “After listening to an Australian crime podcast called ‘the Teachers Pet’ it left me feeling very empty, but also full of thought. The lyrical content and direction of “Bodies” was based upon the real-life events and details that surround this unresolved murder mystery”, stated Marc. [Interviews by Lastdaydeaf.com]

Grim and unrepentant, the music masterfully builds thick chords of tension between choruses, briefly halting the hell-forged harmonies to allow one’s catching of breath, only to reimbue with their palpable-evil mere seconds later. Twin-demon half-moon-skulls mouth their loves, deep inner turmoils, and relief thereof over a backdrop, “…littered with subliminal images and layered thematic imagery which at times is deliberately indistinguishable to create a sense of dark intensity that is hopefully fitting and sympathetic to the track.” 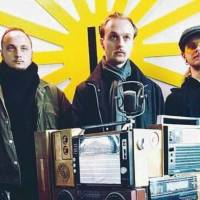