Nicholas Chiari (aka Grabbitz) is a non-stop merry-go-round of catchy wonderous electro-pop sights and sounds that never fails to impress. Like the protagonist in his video, he seems to be driven, nay chased by an alter-ego with breathless abandon, perchance a faceless personification of death or time, and always to new and wildly different heights. Grabbitz’s work has been featured here before with his wall-of-sound dynamic Follow Me and his collaboration with “Space Mom” Rezz on their Covid-lockdown iPhone video Someone Else (Gold Certified and JUNO nominated) both receiving raving darkwavy adoration here.

His newly released third album Time Isn’t Real is perhaps best described on TowerRecords.com as, “…the most accurate culmination of his musical influences – a collage using all the musical materials that he’s made of – a metaphysical museum where anyone and everyone is welcome, from any point in history or the future, to show that music & art can transcend a construct such as time.” RollingStone.com said he is one of 10 artists you need to know, with music that sounds like, “An updated version (of) the heady late-Nineties days when rock and ‘electronica’ commingled freely.”

“This is global detonation, yes, I’m waiting to blow,
Destinations I go will all be painted in gold“

Lightening in a bottle, he must be constantly ablaze with furious untapped energy; the human equivalent of Mentos dropped in Coca-Cola then heavily shaken for maximum impact. Even his alter-ego takes no prisoners, demanding only an ultimate sacrifice, an ended journey, a-sleep in the stars.

2 thoughts on “Grabbitz ~ The Ugly” 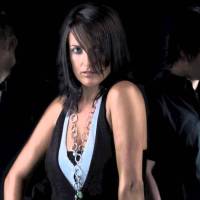