The Crying Boy is a mass-produced print of a painting by Italian artist Giovanni Bragolin (1911–1981) pen-name of the painter popularly known as Bragolin. His paintings feature a variety of tearful children looking morosely straight ahead, sometimes called “Gypsy boys“, although nothing specifically links them to the Romani people. In 1986, British tabloid newspaper The Sun reported that an Essex firefighter claimed that undamaged copies of the painting were frequently found amidst the ruins of burned houses. By the end of November, belief in the painting’s curse was widespread enough that The Sun was organizing mass bonfires of the paintings, sent in by their readers.

Dutch band Bragolin, named after said painter, hails from Utrecht, Netherlands and although made up of original founder Edwin van der Velde (singer/baritone guitarist) and Isolde Woudstra at the time of the song’s release on 2018 debut album “I Saw Nothing Good So I Left“, Isolde was then replaced by Maria Karssenberg (singer/synths/guitars), though sadly she has since left the band as well.

“We sit and lay in the dust,
To narrate our stories in sounds,
A light is casting it out on the regolith,
Patterned lies on the ground”

The infamous curse was largely discounted by Steve Punt, a British writer and comedian who investigated it in a BBC Radio 4 production called Punt PI. The conclusion reached by the program, following testing at the Building Research Establishment, was that the prints were treated with a varnish containing fire retardant, and that the string holding the painting to the wall would be the first to deteriorate, resulting in the painting landing face down on the floor and thus being protected. “Those of a more superstitious orientation claim that the tears running down the boy’s cheeks put out the flames that attempted to burn it.” [extensive write-up on exemplore.com]

In regards to the painted boy himself, investigative journalist David Clarke says that stories naming the child as Don Bonillo or Diablo did not emerge until 2000 in a book by Tom Slemen. They relate the child to several fires including the painter’s studio, however, he says that “there is absolutely no truth whatsoever to any of that.”

“We tell our sad tales,
To hide, to shine, to cross,
We dream down to our bones,
While being trapped in comfort zones,
Shining in our loss” 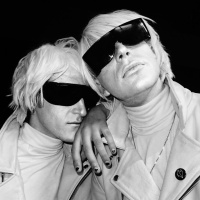